2020 has been a year full of surprises, challenges, and adaptation. It has tested us as individuals, families, as a nation and as a global population. A worldwide pandemic, racial unrest in cities across America, and an upcoming U.S. presidential election may give rise to feelings of uncertainty, fear, and doubt about what the future holds.

Top of mind may be what the election outcome might mean for stock and bond markets. It is natural for investors to look for a connection between who is in the White House and which way stocks will go as a result. However, historical returns suggest that stocks have trended upward across administrations from both parties as shown in the chart below. 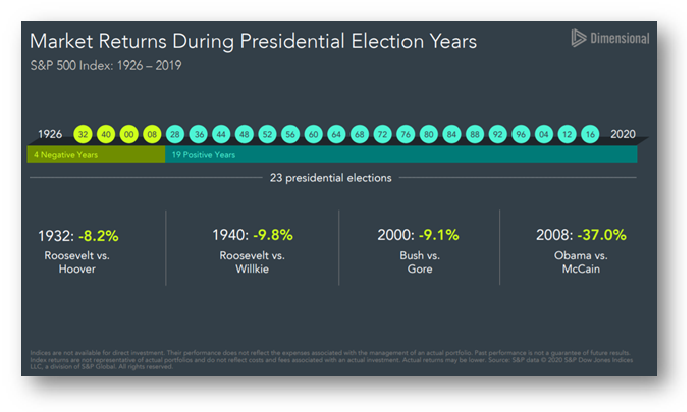 Generally speaking, investors tend to overplay elections, which rarely prove to be instrumental inflection points for economic or market cycles. Note the chart below.  While there is some difference between election and non-election years, this difference is small, and all years show positive average returns. Once we exclude 2002 and 2008 - which had little to do with elections - there is little difference between years. 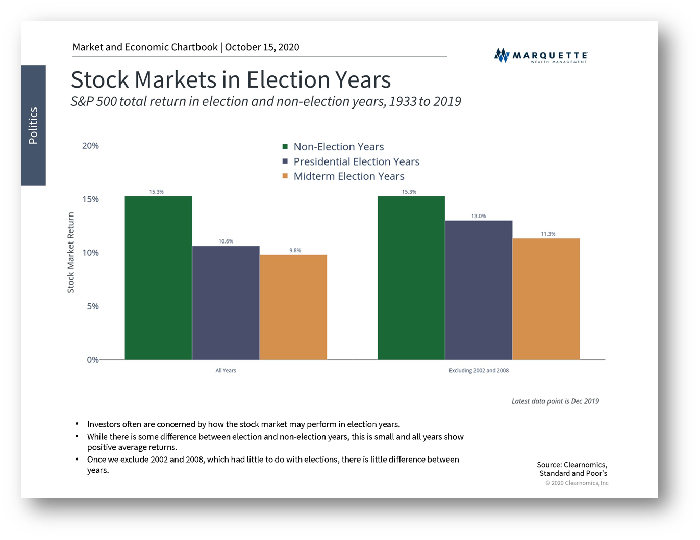 Stock market returns during recent presidential terms have varied, regardless of whether a Democrat or Republican is in the White House: 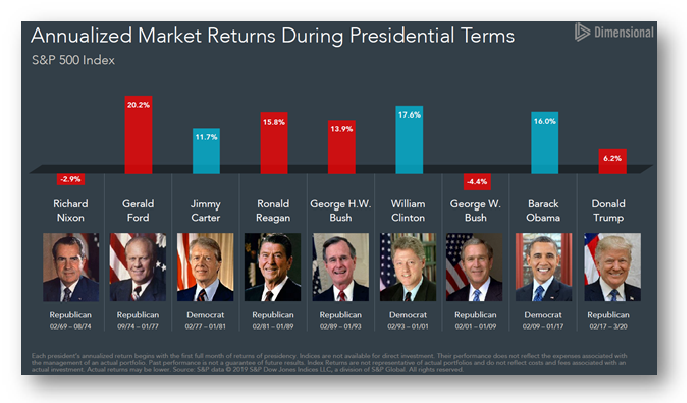 Predictions ahead of elections tend to be ineffective. In the 2016 election, Wall Street wisdom had it wrong when a Donald Trump win was initially viewed as dangerous for stocks. Aside from the 7% overnight fall in the S&P futures as election results came in, this was dead wrong, as a nervous equity market quickly repriced for higher growth, lower taxes, and less fiscal restraint.

Looking forward, investors might be worried a capital-gains tax rate hike would significantly hurt stocks. Perhaps this would cause a flurry of anticipatory selling? However, looking back, the past couple capital-gains tax increases in 1986 and 2013 did not derail strong bull markets.

This does not mean that there won't be stock market corrections in the short run, or that either candidate will implement sound economic policies. What history suggests, however, is that the stock market depends on many other factors besides who controls Washington.

Given all that is going on in the world today, feelings of fear, uncertainty, and doubt are certainly justified but it is important to not let them derail your long-term financial plan and investment strategy. In his article titled The Seduction of Pessimism, Morgan Housel points out it is easier to get someone’s attention by emphasizing a pessimistic view rather than an optimistic one:

“Tell someone that everything will be great and they’re likely to either shrug you off or offer a skeptical eye.  Tell someone they’re in danger and you have their undivided attention.”

Morgan also explains why we, as humans, find being pessimistic so captivating and how it can discredit our ability to evolve in what seem like the direst of circumstances.

He states, “If you underestimate our ability to adapt to unsustainable situations, you’ll find all kinds of things that currently look bad and can be extrapolated into disastrous.

Extrapolate government deficits and we’ll be bankrupt in 30 years.

Extrapolate a recession and we’ll be broke before long.

All of these could be reasons for pessimism if you assume no future change or adaptation. Which is crazy, given our long history of changing and adapting. But convincing ourselves of future change is hard to do, so pessimism is easy to latch onto”

While it’s often easier to focus on the potential challenges we face, we must also acknowledge there are many positives to take into account including a very accommodative Federal Reserve, record low interest rates, additional fiscal stimulus packages being discussed, and hopefully a vaccine on the horizon. As your advisor, it is our job to balance positive aspects with potential headwinds and apply a rational, long-term approach that allows you to meet your goals.


As always, your team here at Marquette is here to help. If you have any questions, comments, or would like to discuss things in more detail we are happy to do so.